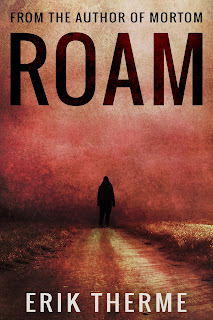 Bio:
Erik Therme has thrashed in garage bands, inadvertently harbored runaways, and met Darth Vader. When he’s not at his computer, he can be found cheering for his youngest daughter’s volleyball team, or watching horror movies with his seventeen-year-old. He currently resides in Iowa City, Iowa—one of only twenty places in the world UNESCO has certified as a City of Literature.

Welcome, Erik. Please tell us about your current release.
Roam is the story of a young man who believes he’s being haunted by his dead father, and the only way to redeem himself is by saving someone’s life. It’s a character-driven story and very different from my first two novels, Mortom and Resthaven.

What inspired you to write this book?
The original draft of Roam was conceived many years ago and revolved around a boy who befriends an old man working at a hotel. No matter how hard I tried, I couldn't figure out how to finish the story, so I kept the kid and the hotel, and I worked backward to create a new story from there.

Excerpt from Roam:
“Hell, no,” Scott said under his breath.
He jammed the key back into the lock and cranked on it with more force. If Mandy had given him the wrong key, he couldn’t be held responsible for what he did when he got back to the hotel. Things were getting way too high maintenance, and after this “pregnancy” charade was played out, he would be taking a hard, serious look at his options. No one ever said anything about having a baby.
“Come on,” he hissed. The key threatened to bend under the pressure as he bore down harder. “Turn, you son-of-a—”
The lock spun and the door swung open. He jerked back a step, half-expecting something or someone to come rushing out, but there was only the shadow of the door.
“I’m not a murderer,” he said loudly. Mandy kept a roommate and the last thing he needed was to get clocked by a baseball bat. “Mandy gave me her key. I’m just here to get something for her.”
He lingered in the hallway, wanting nothing more than to turn around and forget the whole thing. All their time was spent at the hotel, and that was exactly the way he wanted it. But this was different. This was Mandy’s life: the place she slept and ate. When you started going to a girl’s apartment it made things more personal, and he had no interest in that. It wasn’t like he was going to hang out there with her or spend the night or anything. Sleep was impossible enough without having another body crammed into the bed.
“Hello?” he said, poking his head into the apartment. “Anyone home?”
The place appeared empty. He stepped inside and locked the door behind him. You couldn’t be too safe in this day and age.
Medicine cabinet, he reminded himself.
He moved down the hallway. Dirty dishes balanced on every flat surface in sight, and garments of clothing were strewn everywhere, as if a hamper bomb had gone off in the middle of the living room. Even the kitchen counter had been breached by shirts and socks.
The bathroom reeked of pungent perfumes and soaps, and he did his best to ignore the smell as he opened the medicine cabinet and stared at the mess inside. There were remedies for everything: pills to make you sleep, tablets to fight nausea, creams to cover pimples . . . it went on and on. And in the top left corner: one green plastic birth-control dispenser.
“All this fuss for you,” he said.
Until that night, he had never known it was the pill she was on. He knew some sort of birth control was involved (after their first romp, she told him they were “safe” and had nothing to worry about), but she had never offered any specifics. Now he was part of the process and that wasn’t okay. It was her body, her responsibility, and he was the one scrambling to fix her mess.
For an instant he saw a ghostly image of himself lean over the toilet and drop the dispenser inside out of spite. It was a dumb thought: the dispenser was too big to flush away, and it would increase the chances of her actually staying pregnant.
“Staying . . .”
The thought jagged him like a mental paper cut. Was that how it worked? Did a girl get pregnant each time she had sex, and the job of the pill was to kill the fetus as it began to grow? Was that what they were doing? Making and killing babies at the same time?
He realized he was still gripping the birth-control dispenser and shoved it into his pocket with a quick motion. It felt better not to look at it. Connect the dots; one association led into another.

What exciting story are you working on next?
My current work-in-progress is about a father searching for his missing daughter, who might—or might not—have been kidnapped. I wanted to tell a story that blurs the line between right and wrong and keeps the reader unsure who to root for. I’m also putting the finishing touching on a novella entitled Kat, which will only be available to my mailing list subscribers. Readers can join here: http://eepurl.com/cD1F8L

When did you first consider yourself a writer?
I became a writer when I was fifteen and wrote my first story. It doesn’t matter if you’re with a publishing house, self-publishing, or even writing just for yourself: once you put words on paper, you’re a writer.

Do you write full-time? If so, what's your work day like? If not, what do you do other than write and how do you find time to write?
Writing isn’t my primary source of income, and I currently spend my days managing a small office. The majority of my writing is done during evenings and weekends, but if I’m feeling especially inspired, I might try to sneak in some pages over lunch. The important thing (for me) is to try and write every day—even if only for a few minutes.

What would you say is your interesting writing quirk?
The majority of my novels are short reads that often unfold over a few days or a few hours. I also love to include friends’ names in my stories, as I figure they’re fun “Easter Eggs” to be found.

As a child, what did you want to be when you grew up?
As a child, I created everything from comic books to bubble-gum cards, and I was certain I was destined to be an artist. When I reached my teens, my interests shifted to music and writing, and once I tried my hand at writing a novel, I knew I had discovered my true passion.

Anything additional you want to share with the readers?
I love connecting with people, so feel free to drop me a message at Facebook, Twitter, or www.eriktherme.com. My book can be found on Amazon.

Thanks for joining me today, Erik.