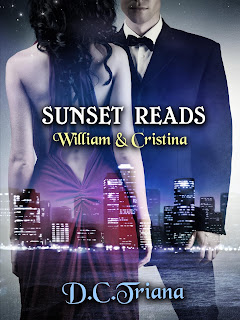 The book is currently free on Kindle Unlimited and will be for quite some time.

Welcome, D.C. Please tell us a little bit about yourself.
I was born in New York City to Colombian immigrant parents. My upbringing was probably the best any child could have. I went to catholic school until college and grew up in Queens. My parents were very adventurous and loved to read and listen to all types of music which is probably where I get my creative side. They were also the ones who taught me what it means to persevere and get ahead in life.

I currently reside in Orlando, Florida. When I first moved from NYC, I was working in a book store which gave me access to all my favorite books. I am grateful to have read so many books in my lifetime, delving into romance, science fiction and horror. My favorite book of all time is Pride and Prejudice. My influences include authors such as Stephanie Laurens, Judith McNaught, Janet Evanovich, and Laurell K. Hamilton to spice things up a bit.

I think my greatest goal was accomplished earlier this year. I started travelling to break free of the monotony and during those travels I realized that what I wanted to do with my life was write. Stories started to flourish in my mind and soon enough I had completed a novel. Setting my mind to it I decided it was time for the world to get to know me. So here I am...excited about starting a new journey in life...although my talent is constantly being tested it is all about having the strength to persevere!

Please tell us about your current release.
William Jameson is the son of Isabel Jameson who has passed away and left him the inheritance of her publishing house Sunset Reads. William is a very business savvy man who has helped businesses take flight and has made a name for himself in New York City and he’s ready to do the same with his mother’s company. Cristina Cruz is the publishing house’s best-selling romance author and she was Isabel’s confidant in life. What Cristina doesn’t know is that Isabel has left her with part of the company’s shares as well as half of the property itself. She also left her in the hands of William, the obnoxiously sexy new CEO.

William and Cristina meet as he is walking out of his Editor’s office, Adele, who informs Cristina that she now has a deadline on her book and there is nothing she can do since it is placed by new management. Cristina, a strong willed woman confronts William, starting off on a heated exchange. As she gets to know him, instead of finding a tyrant, she slowly starts to wonder if this attractive man is as hard headed as he seems. She finds him intriguing and the next thing she knows his eyes start haunting her in her dreams and in her story writing.
In the midst of all this, there exists Christopher Moore, an abusive stepfather to William who has set his eyes on Sunset Reads and is willing to do anything to ruin William whom he has strong feelings of hate for. Cristina finds herself in the middle of Christopher’s overbearing and dangerous nature, and realizes he will do anything in order to get what he wants.

What inspired you to write this book?
It’s kind of funny, but the story actually came up from my struggles with being an author. I have a very wild imagination and I always wanted to either work in a publishing house or be a writer, I had also just gotten over a bad breakup so there goes the first inspiration. My second came when I was watching Superman, I fell in love with Henry Cavill’s blue eyes, so he all of a sudden became my muse when writing William. You’ll meet a little dog named Obi, he’s my real companion, and he is quite a character. Obi will lie by my side for hours while I’m writing and he’s so wonderful I had to give him to Cristina. You will also meet an array of characters from Layla- my best friend- to Henry, whose personality is very much my younger brother’s. This is the first in a four-part series and many characters you will get to meet again.

Excerpt from William & Cristina:
Cristina always felt somewhat out of place in any corporate setting, especially since she mostly worked from home. Her job had to be the best in the world. She set her own hours, her own office, her own deadlines; it was perfect.
Dressed in a navy blue blazer, white t-shirt, black leggings and flats she couldn’t have looked more out of place amongst all the black, pencil skirts surrounding the area. For being publishers and editors they could lighten up a tad.
She approached Madeline, Adele’s secretary; she was an older lady with kind eyes and a gentle smile, who currently looked like a nervous wreck this morning. “Morning Maddie, what’s going on today?”
Madeline stood up, concern etched in her eyes, “She’s mad, like really mad.”
“Who? Adele…why?”
“The new CEO is here, it’s not pretty, he’s quite temperamental, and he has officially succeeded in pissing Adele off. I’m warning you sweetie it’s not pretty this morning.”
Warily looking over at the closed door ahead, Cristina thought about turning around but figured Adele might need her, so she slowly approached the office. As she reached out, the doorknob was suddenly yanked out of her hand. The door flew open and she was left staring into the darkest pair of blue eyes she had ever encountered. The man on the other side was beyond elegant and absolutely, ruggedly, handsome. Dark hair, chiseled jaw, at least six foot two… he was seriously gorgeous. The type of man you would find in a good book on one of those long nights. He stared back at her and Cristina froze, not knowing what to say or do.
“Are you going to move or just stare at me all day?” His voice was deep sending a few shivers down her spine; yet it had a rude undertone that made Cristina cringe inside.
“Excuse me?” She responded startled by his remark.
“You are in my way.” He said pointing around her.
Cristina looked down at herself and then looked at him bewildered at such a response. “I don’t think you know who I am…”
“Nor do I want to know. If you’ll excuse me…” he said literally moving her to the side so he could pass.
She stood there for a moment, in a daze; Madeline came up beside her. “I told you so.”
Adele came up to the door, “That man is the most rude, arrogant, good looking, son of a bitch I’ve ever known!”
Cristina nodded agreeing with everything Adele said. She pretty much encompassed the man in a few well-chosen words. “Where in the world did he come from?” She asked staring down the hallway.

What exciting story are you working on next?
Right now I am writing the second in the series based on the characters Layla and Damian whom you’ll meet in the first book. I already have ideas for my third and Henry will definitely be my fourth male protagonist. I am very excited about bringing these characters to life. Sunset Reads: Damian & Layla will be out in late Summer 2016.

When did you first consider yourself a writer?
I started writing when I was thirteen. I used to be bullied a lot at school so I found an outlet in my diaries and then I would get lost in my imagination while writing short stories, especially love stories. I knew I wanted to be an author as early as fourteen, I just never got around to get serious with it until now.

Do you write full-time? If so, what's your work day like? If not, what do you do other than write and how do you find time to write?
I don’t write full-time although I hope to in the future. Right now I’m a Human Resources Generalist at a timeshare resort. It’s a great job and a great opportunity to meet new people, but in my leisure time I write. I’ve always carried a notebook around with me so if I see something that amuses me and I may be able to add in a book or to a character I write it down. I especially write in the evenings right before bed, I’ll be dozing off and there goes an idea. There have been nights I find myself up at two or three in the morning writing a part of a story from a prompt I wrote earlier in the day.

What would you say is your interesting writing quirk?
I love to sit at a coffee shop with a cup of coffee and people watch. If something catches my eye I go with it and see what arises in my imagination. I also like to listen to people and watch their expressions, those little quirks always make it into my stories.

As a child, what did you want to be when you grew up?
I wanted to be a teacher; I’m actually a Child Development major.

Anything additional you want to share with the readers?
Sunset Reads is very special to me and I hope that the characters and the storyline become just as special to my readers. I always want to make my stories somewhat realistic and I want to appeal to the type of audience who loves to fall in love and will allow themselves to get lost in the arms of a tall, dark and handsome man with electrifying blue eyes. I hope you enjoy Sunset Reads and continue to join me in this journey!

Thanks so much for being here today, D.C.!