Novelist Ron Kearse joins me today to chat about his new LGBT, Just Outside of Hope.

During his virtual book tour, Ron will be awarding a $20 Amazon or Barnes and Noble (winner’s choice) gift card to a lucky randomly drawn winner. To be entered for a chance to win, use the form below. To increase your chances of winning, visit his other tour stops and enter there, too!

An artist, broadcaster, actor, and writer, Ron has a colourful and varied work resumé.

Having lived a nomadic life, Ron has finally settled in Victoria, BC where he lives with his partner James Howard.

Just Outside of Hope is the second installment in the Road Without End Trilogy, he has also published a photo book of Vancouver Street Art in the mid-1980s called Lost History.

Welcome, Ron. Please share a little bit about your current release.
Just Outside of Hope is the sequel to Road Without End, and is the second book in the Road Without End Trilogy. It takes us from the Canadian Prairies to the pubs, bath houses and nude beaches of Vancouver, British Columbia.

The place is Calgary, Alberta in September 1980, and ex-lieutenant Jim Whitelaw is dealing with the guilt he feels from the fall out of a military tribunal that happened only a couple of months before. And, there are lingering family issues which makes things worse. Just as he feels he’s getting his life together, cracks appear once more and he has to make some serious decisions.

Meanwhile, in a matter of a moment, Jim’s friend and sometimes lover, Bert Gilhius, finds himself trapped in a serious situation that eventually sees him set off on new adventures in Vancouver.

These are two more stories in the continuing series of the lives of gay men who lived through the most exhilarating and terrifying of times.

What inspired you to write this book?
The thing that inspired me to write the entire trilogy in the first place, was looking for stories by Canadian Queer writers that featured Canadian Queer characters, and noticing there were almost none. There were lots of American and British Queer authors –– but there was a decided absence of Canadian voices.

At that time, for whatever reason, if you went looking for stories on what it was to be queer in Canada, what you’d find were excellent journalistic books and periodicals filled with facts and figures… but lacking in human insight, and personal experience. So, I wanted to help change that.

Excerpt from Just Outside of Hope:
A fellow rides by on a ten speed. He smiles and says hello to me. I stop and watch him as he disappears around a corner. Goddamn he reminds me of Jim. Jim! I forgot all about him! What a revelation that is, considering how hard I fell for him. I did receive a couple of letters from him since he moved to Winnipeg, and everything seemed to be going okay. I did answer both of them from jail, but then I didn’t receive any more. I don’t know why the letters suddenly stopped, and maybe I never will. It’s too bad; because Jim was one guy I would have done just about anything for had we gotten together.

I walk across the street to my sister’s place, the house I’ve called home since I got out of the slam. The boulevard tree outside of the house is starting to bloom.

I ascend the three steps to the veranda and unlock the door. I’m the only one at home again since Patty and Keith are at work. I take off my shoes and head into the living room. Puddles their cat meows at me as I pass him, and I bend down and give him a few short affectionate strokes on the top of his head.

I go to the phone to see if any messages were left for me. A small piece of paper is lying beside it. Hopefully this is a job interview.

It says Bert call Warren with a phone number scribbled below. I immediately smile, this is the best news I’ve had in four months. He said he’d phone me when his sentence was through. 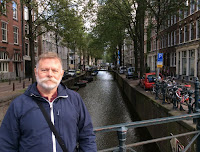 What exciting story are you working on next?
I’ve got a couple of “irons in the fire,” as it were.

Firstly, I’m working on the third installment to the Road Without End Trilogy called Last Chance Town. I’m hoping it will be available to the public this autumn.

And I’m in the beginning stages of compiling and editing a second edition of an anthology I edited two years ago called Sharing Our Journeys, Queer Elders Share Their Stories. This new edition will feature the voices of Queer Elders of Colour. I am talking with the folks who published the first anthology and they are very interested in this project. I already have three people who are interested in sharing their stories. So, look for that by the end of next year.

When did you first consider yourself a writer?
I’ve written all of my life, especially when I wanted to express my emotions. I found writing how I was feeling came so much easier to me than trying to verbalize my feelings. I was encouraged by my teachers in elementary school. They would say things like, “I love your imagination, keep writing.” I always seemed to be a good story teller.

Do you write full time? If so, what is a routine day like?
I do write full-time. I like to get up early, have coffee, check my daily e-mails, and then I’ll turn on the laptop, go to my story, read what I’ve written the day before, and change anything that I feel needs to be changed. It’s then that I can carry on to the day’s writing session.

What would you say is your interesting writing quirk?
While I’m writing, I like to listen to the music that was popular during the time period I’m writing about. So, I’ll create a playlist of songs from that time, for example, a play list from the year 1980. Problem is, if I’m playing music while I’m writing, the music distracts me. So, every so often I’ll stop writing, and listen to a couple songs from the playlist. It gives me the feel I need to carry on writing the story.

As a child, what did you want to be when you grew up?
The first thing I remember wanting to be when I was very young was a doctor. Then, about the time I entered the fourth grade, I wanted to be an actor. I was a teenager in the 1970s when I decided I wanted to be a disc jockey with my own radio show.

Anything additional you want to share with our readers?
Many times, when people find out that I’m a published author, they will say to me things like, “I’ve always wanted to write a book, but who would be interested in what I have to say?” My answer is, “You would be very pleasantly surprised.”

Sure, many things may have all been said before, in many different ways…but not by you. I encourage people to write. All it requires of you, is for you to just start writing. And a good way to start is by keeping a journal. That gives you the discipline to make time in your everyday to write.

I’ve found that journaling can also provide inspiration, especially when you have been doing it for several years. I’ve turned to my journals several times, to lift slice-of-life scenes directly out of them, and set them in my novels.

Thank you for being here today!